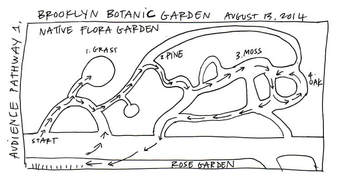 ​“Enchanted” was a site-specific performance in the Native Flora Garden at the Brooklyn Botanic Garden.  It was inspired by the uniqueness and beauty of four ecosystems native to New York (pine barrens, prairie grass, sphagnum bogs, deciduous forests), and featured original music by Katie Down.
Watch an excerpt. 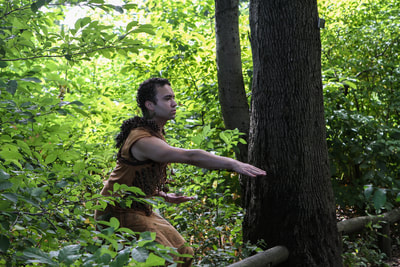 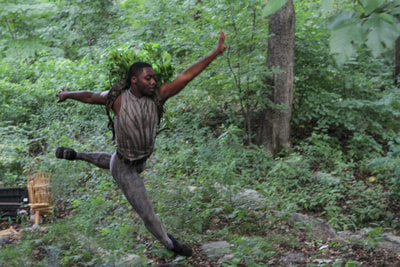 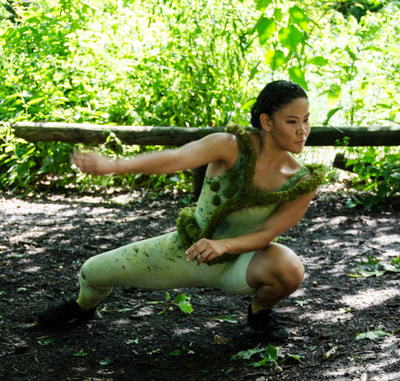 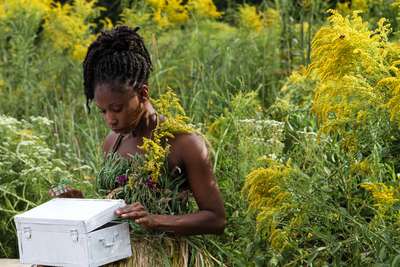 ENCHANTED
Delirious Dances is the first dance company to perform a site specific work in the flora beds at the Brooklyn Botanic Garden (BBG). Previously dance companies had to perform on the grass lawns, cement pathways, or a platform in the Cherry Esplanade.

In 2013 Delirious was invited to create a site-specific work, Enchanted Garden, for the BBG Spring Gala. The work would happen during cocktails and the after party. The performance was to celebrate the renovation and reopening of the Native Flora Garden, which is the oldest section of the BBG and also the first research garden in America dedicated to preserving native plants. We consulted with Uri Lorimer (Native Flora Garden Curator) on identifying areas in the garden where we could work with minimal disturbance to the plants, as well as on identifying ecosystems native to New York, that became the source material for Enchanted.

The following year BBG invited Delirious to perform the work, retitled Enchanted, on July 23 and August 13, 2014 as part of their Member’s Night events. This allowed us to do additional research into the various ecosystems, which included volunteering at Hempstead Plains – the last remnant of prairie grass east of the Alleghany Mountains, which is being threatened by invasive species and over development of the surrounding area.

The Concept
Enchanted emphasized the uniqueness and beauty of four ecosystems native to New York, specifically the pine barrens, prairie grass, sphagnum bogs and deciduous forests. It featured four dancers and four musicians who each represented one of the ecosystems; and was designed to augment the landscape of the Native Flora Garden.
The performance accommodated forty people, who were divided into four groups, and took a guided simultaneous stroll through the Native Flora Garden to experience the dancers and musicians nestled in various locations. The performance culminated in a final dance along a pathway and then a bridge that brought together the dancers, musicians and audience.

The Movement
Each dancer had a solo that was inspired by the life cycle, physical structure and texture of a plant in the ecosystem they represented (Bluestem Grass and Golden Rod, Oak Tree, Pitch Pine, Sphagnum Moss). Their solos were designed to fit together like a jigsaw puzzle to form a whole, similar to how the instruments in an orchestra have individual characteristics, yet work together to create a unified experience; or how the plants in a garden are distinct, yet flow together to create a seamless visual and tangible landscape.

The Music
The music was composed by Katie Down and ranged from lilting folk songs to structured improvisations that wove with the natural sounds in the garden: from the shift of the wind in the trees and bushes, the rustle of insects, birds and small animals; and the surrounding hum of neighborhood car traffic. The instruments were Bulgarian Kaval, mouth piano, saxophone, Turkish Ney, ukulele, various percussive instruments and violin.

The Costumes
The costumes by Meghan Healey and Edisa Weeks were dyed and painted to match the native ecosystem being embodied. They incorporated plant material to emphasize a hybrid, part nature, part human appearance. The plant material included living material in the form of fresh grasses, flowers, tree branches, pine needles and sphagnum moss, as well as dried material (pine cones, acorns, raffia) to reference the various seasons. The costumes were inspired by the earthy sensibility of visual performance artist Ana Mendieta, and the expressive decorative detail of sculptor Nick Cave. Due to the fragility of the living material, the costumes were assembled on the dancers prior to each performance. 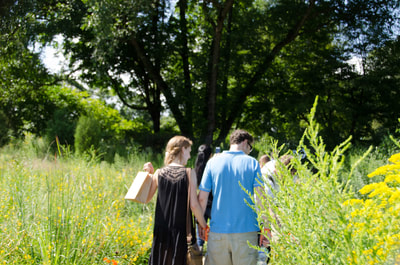 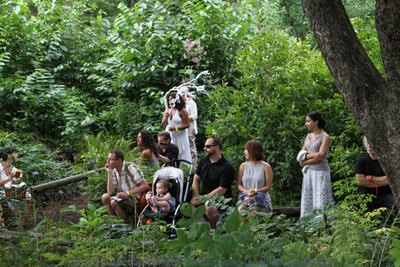 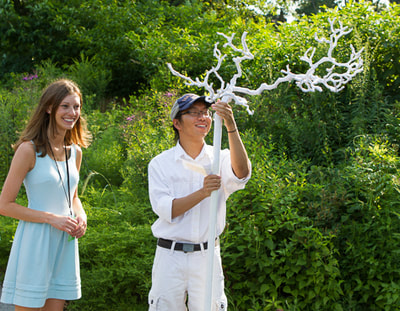 The Guides
The four guides (Queens College Dance Majors) wore all white and had staffs made out of tree branches that were meticulously wrapped in layers of white crepe paper, so they would be easier to see and follow. When the audience arrived they were given a colored ribbon (lavender, orange, green or yellow) that identified their group,  and which guide they would be following. 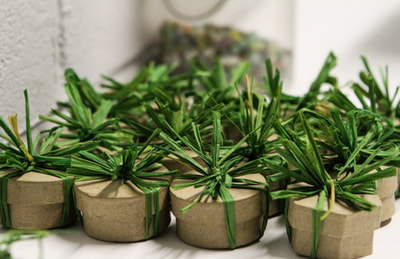 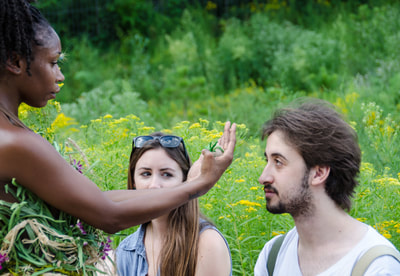 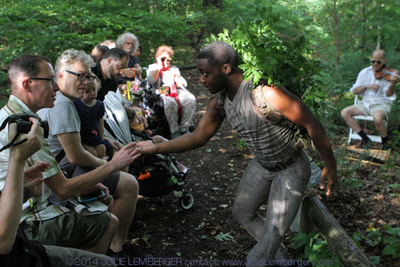 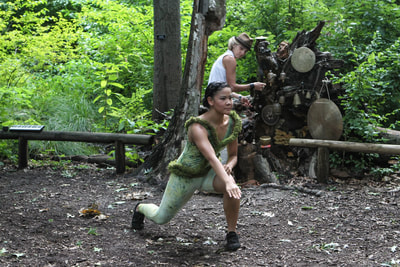 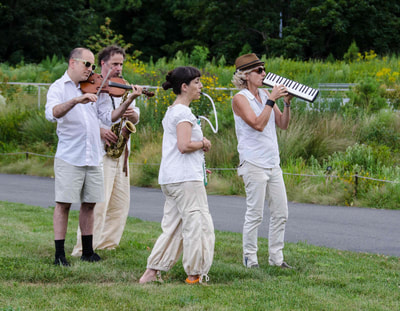 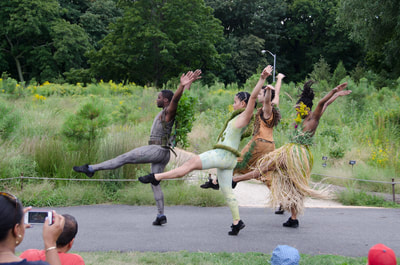 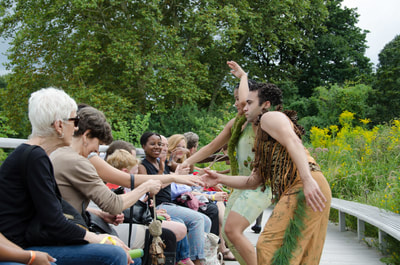 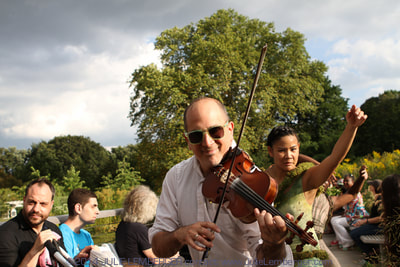 The Gift
Each dancer had a small round box to gift to an audience member. The box contained:
“Working with the plants that were here before we were is a way to create a real sense of place.”

“Garden designers have the luxury of working with the fourth dimension—time. So what we’re creating here will always be a work in progress. We set it in motion and let it take off.”

“Early in my career I worked with the typical plants that everyone was using at the time—hollies, crepe myrtles, English ivy, pachysandra. There are generic landscapes filled with these plants and they all look alike. When you’re there, you could be anywhere in the country. They’re the equivalent of those highway exits with fast food restaurants and chain stores.”
ENCHANTED